Next Step On My Lifepath: Retreats 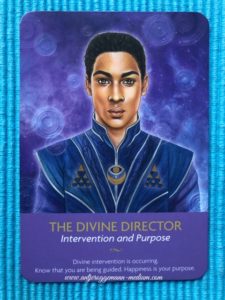 1,5 months ago I did a channeling for Christoph, my osteopath, as part of his Birthday Year Reading which is a gift I gave him for his 40th birthday. It was the first recorded audio channeling I did and the first one out of twelve for him. The card I pulled was „The Divine Director“ and he came through with a message for both of us, explaining that we are in a spiritual partnership and learning and growing together. Christoph is helping me to heal through osteopathy treatments while we are learning and experiencing what amazing things osteopathy can do to not only release physical tension and pain but also emotional pain and trauma.

Neither of us knew that his 40th birthday would be our kickstart for a joint life purpose as healers. The Divine Director made it clear that more people like me would come in the future to be treated by him and explicitly said that he would give no timelines for that.

Lo and behold 6 days later I received the vision for the Energy Clearing Retreat that I was to hold and include Christoph. Over the course of the summer holidays it became clear that it would happen next year in May. I originally thought I would also include my naturopath Julia, but that was made impossible due to legal and logistical reasons and did not feel right for me and for her.

On Thursday Christoph and I finalized the date and I found the right hotel and booked the room, all in one day. Now I’m putting together the information material to show you all while being and getting excited.

And who shows up last night? The Divine Director who gave me an extra message telling me that it’s okay and it’s going to be great.

Remember that as a sensitive person you need times

There really are no sole physical symptoms. The ph

Sun activity has been high since last week with so

In this meditation Lakshmi fills you with her ener