All delays are beneficial 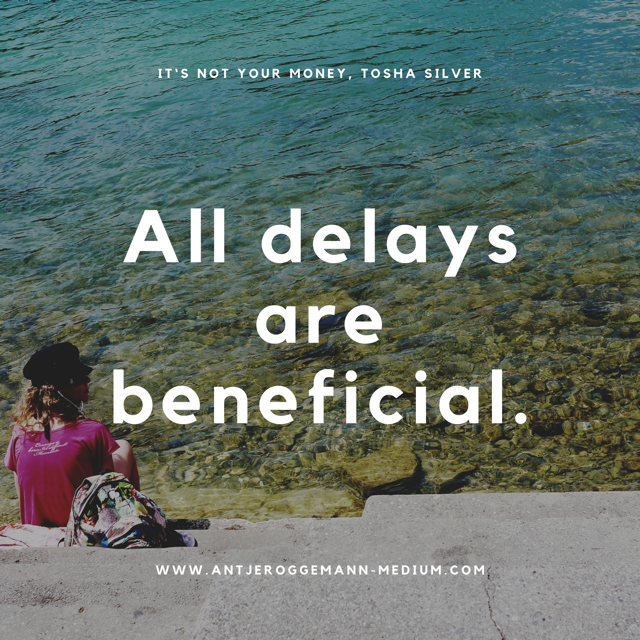 That is what I just learned in multiple areas of my life this year and recently.

One of my flatmates had registered us with the local electricity company in April, yet we didn’t receive a confirmation and a notification about what to pay. She went there multiple times and always got told that they had trouble keeping up and we would get a letter. It never happened until late September. But it meant that we didn’t pay electricity and gas for half a year and for me that was actually good and reduced my financial load.

When I had to ask for state support again on September 2, I got an appointment to hand in the application and all needed papers on September 12, which I did. I got a list with more papers to hand in which I did the same day via email. And then nothing happened. I had also asked my health insurance to send me a note which the state agency needed. It didn’t come.

On October 1, still not having received money, I called and asked what was going on. That’s when I learned that nothing had happened, because the email had not arrived. I nearly cried on the phone. I breathed through it and sent everything again, this time in 4 emails and asked for confirmation of receiving. Three emails came through, one disappeared again. I sent that again.

I called the health insurance. They had forgotten to send the note and did it right away. It arrived a few days later and I sent it to the state agency. Today I received the money from them.

Why was all the delaying beneficial? When I originally handed in my application for money on September 12, I did not yet have the monthly gas payment notice. That arrived a few days later. So I would not have gotten the money for that. And because the health insurance forgot to send their note which states a lower amount of money for my health insurance than I actually pay (too complicated to explain, typically German), the state agency paid my health insurance in full for September and less starting October, so that I only have to pay the rest starting October.

Now, all during that time when the electricity registration did not come, we were often irritated. Yet I remember having the feeling that it made sense and it would come at the right time. My flatmates kept asking when it would come and complain about it. That never felt good for me.

I also had a hard time waiting for the state agency money. When I applied, I literally had 37 Euro left on my bank account. What I learned in those past weeks is that I have clients who work with me, who booked readings and courses and helped pay everything that needed to be paid during this time, except rent and health insurance.

I learned a lot of patience, a lot of trust and perseverance in those past weeks. I was immensely grateful to my clients. And even though I never understood what would happen when, I learned that „All delays are beneficial.“ I would even go so far and say that probably there are no delays. It’s all divine timing.

Remember that as a sensitive person you need times

There really are no sole physical symptoms. The ph

Sun activity has been high since last week with so

In this meditation Lakshmi fills you with her ener